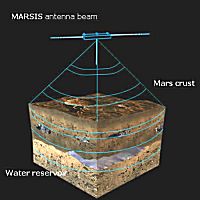 August 31: Europeans will seek water on Mars. Clues like patterned cracks on the surface suggest that Mars was once wet. Underground water may still be present. "The European Space Agency's Mars Express followed by the Netlanders, led by the French space agency, CNES, will be the first missions capable of prospecting directly for underground water on Mars." Mars Express will carry a ground penetrating radar, called MARSIS, into polar orbit around Mars in 2003. It willl work much like airborne radar that prospects for underground minerals on Earth. The Italian space agency, ASI, is proposing to fly SHARAD on NASA's 2005 orbiter to look for water in the top few hundred metres of crust. And In 2007, Europe will send four small Netlanders to different locations on Mars from where they will sound the Martian interior seismically.

Life on Mars! is the related CA webpage.

Tagish Lake meteorite may be a D asteroid because it is darker and redder than other carbonaceous chondrites. If so, it is the first example ever recovered.

Comets... is a related CA webpage.

Jack Farmer before House Subcommiteee on Space and Aeronautics. [Thanks, Marsbugs.]

Advances in our Understanding of Life: Excerpts from the testimony of Jack D. Farmer, SpaceDaily.com, 21 August 2001.

Sir Fred Hoyle died today. He was 86 years old. He was born in Bingley, Yorkshire, England on June 24, 1915. He received a master's degree from Cambridge in 1939 and was elected Fellow, St. John's College, Cambridge in the same year. In 1958 he rose to become Plumian Professor of Astrophysics and Natural Philosophy. He was a leading contributor in the discovery of how the elements from lithium to iron are synthesized inside stars. In 1997 he was awarded the Crafoord Prize by the the Swedish Academy in recognition of outstanding basic research in fields not covered by the Nobel prize. He leaves his wife Barbara, a son and a daughter, and four granddaughters.

An Interview With Fred Hoyle is a related CA webpage.

Thanks, Chandra Wickramasinghe and CC-Net. 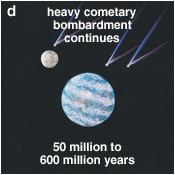 Pseudo-panspermia is becoming mainstream. In American Scientist, "Comet scientist Armand Delsemme reviews the evidence and argues that comets from the vicinity of Jupiter contributed the bulk of the constituents found in Earth's biosphere." Among these, he continues, are organic molecules that enabled life to start. "Pseudo-panspermia," the import of the "ingredients" of life from space, is not the full panspermia theory in which whole cells come from space. But the growing acceptance of this weakest version brings science closer to the theory we advocate. [Thanks, Loys Nunez.]

Introduction: More Than Panspermia is a related CA webpage. 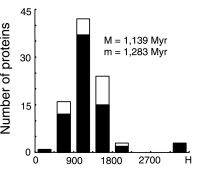 Fungi much older than their oldest fossils? Another molecular analysis finds genes or proteins that appear roughly twice as old as they should according to the fossil record. The analysts, biologists and astrobiologists at Penn State, are inclined to disbelieve the fossil record. "The first fossil land plants and fungi appeared 480 to 460 million years ago (Ma), whereas molecular clock estimates suggest an earlier colonization of land, about 600 Ma. Our protein sequence analyses indicate that green algae and major lineages of fungi were present 1000 Ma and that land plants appeared by 700 Ma." Similar discrepancies have already been observed for several other species, and some scientsts say that the molecular clocks are not reliable. Could the anomaly indicate that genes really are older than their first expression on Earth?

Metazoan Genes Older Than Metazoa? is a related CA webpage.

Panspermia: Where Did We Come From?, by Emily Willingham, (originally) hmsbeagle.com, 20 July 2001.

Introduction: More Than Panspermia is a related CA webpage.

The Astrobiology Conference in San Diego, sponsored by SPIE, included sessions on Mars meteorite ALH84001, water on Mars, the Viking life detection experiments and many other astrobiology-related topics. Some of the highlights of the July 30-31 meeting:

Instruments, Methods, and Missions for Astrobiology IV: conference homepage with complete schedule of papers and authors.

Life On Mars! is a related CA webpage.

Fossilized Life Forms in the Murchison Meteorite is a related CA webpage.

An Atmospheric Test... is a related CA webpage. 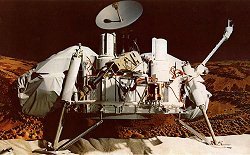 Life On Mars! is the related CA webpage.

A NATO-sponsored Institute on Astrobiology will be held on Crete. Its objective is "to provide a systematic, in-depth, treatment of the new and rapidly developing field of Astrobiology by distinguished lecturers." The website lists Fred Hoyle and at least two Nobel laureates among the lecturers. [Thanks, Richard Hoover, Organizing Committee.]

July 11: A dying star boils the comets around it. This is the best explanation for the huge amount of water vapor seen by the Submillimeter Wave Astronomy Satellite (SWAS) around CW Leonis, located 500 light years from Earth in the direction of the constellation Leo.

Comets... is a related CA webpage.

The moon, plate tectonics and life on Earth. "If the moon had not carried away most of the crust, there would be no ocean basins, no land, and no chance for life to evolve on land." [Thanks, Jim Galasyn.]

The Moon And Plate Tectonics: Why We Are Alone, by Nick Hoffman, SpaceDaily, 11 July 2001.

Gaia is a related CA webpage.

NAI considers nanobes. Commonly known as nanobacteria, these particles are so small that most mainsream biologists think they cannot be alive. The smallest ones, at 20 nanometers in diameter, are about the size of a ribosome. But they can be lifelike in several respects, including growth or proliferation, physical form and DNA content. Fossilized ones were seen in the Mars meteorite, ALH84001, and were part of the case for former life on Mars. Their most visible champion is Robert Folk of the University of Texas, who has found them in Italian marble and almost anywhere else. One possibility not mentioned in the new web article is that at least some of the particles are the remains or distress products of normal (larger) bacteria.

How Small Can Life Be? by Leslie Mullen, NASA's Astrobiology Institute, 9 July 2001.

Life On Mars! is a CA webpage with more about nanobes.

NAI comments on SETI in a review article on the web.

What Difference Does It Make? is a related CA webpage. 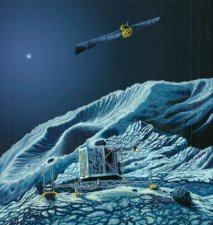 CONSERT ready for Rosetta. This 3kg package built in Germany and France will probe the internal structure of Comet Wirtanen's nucleus using an ingenious radar sounding technique. The Rosetta orbiter, at a range of 30 km, will send pulses through the comet to the lander where the signals will be detected and retransmitted to the orbiter. The time delay of the signal, in various directions, will give information about the comet's interior. [Thanks, Ron Baalke.]

Comet Rendezvous is a related section of the CA webpage Can The Theory Be Tested?.